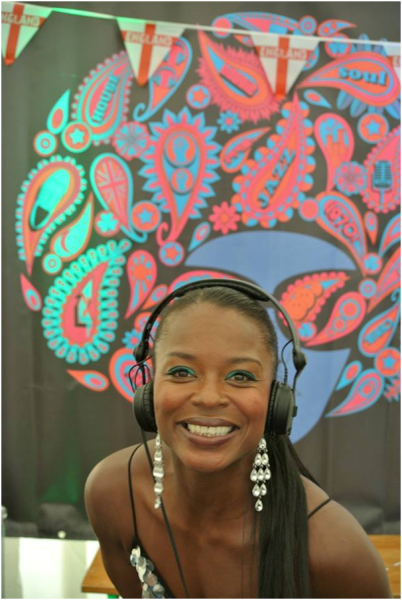 As much as this reads like a cliché, I did actually grow up in a house constantly filled with music. Whether it was reggae, soul, disco or pop, my parents were always dancing and singing along and making sure us kids joined in.  So it makes sense that music is, and always has been, the centre of everything I do – from my work as a fitness instructor, through to singing in a band, and now spinning tunes with the Six Million Steps boys.

I have been with my band – The Usual Suspects - for around 10 years.  It was something I fell into purely by accident. Working in advertising meant that I was surrounded by extremely talented and artistic individuals and it just so happened that some of them sang or played musical instruments.  After a few jamming sessions we decided to set up a soul and disco covers band, and we are still going strong.  I love singing.  And being in a band with talented musicians is a huge buzz that stays with me for days after our gigs.

Up until meeting Dave Cooper, I never dreamt of becoming a DJ.  I was always happy attending events and enjoying watching and hearing the DJs do their job.  I met Dave at a Soul Week in Lloret de Mar.  We spoke about music and I mentioned my obsession with a DJ outfit called Six Million Steps, who I’d been following for around 5 years.  I told him he should check them out because they played great soul and disco stuff on their internet radio shows and put together the slickest mixes I’d ever heard.  You can imagine my shock, when Dave told me he was part of the 6MS team!

Meeting the 6MS boys gave me the bug to become a DJ and I bought myself some decent CDJs, speakers and headphones.  I got some serious beat-mixing tuition from Dave and I practised for hours on end, driving my husband crazy in the process.  It was the most frustrating thing ever learning to beat-mix properly, but when the penny finally dropped there was a huge sense of relief and also admiration for those DJs that make it all look so easy.

I was now a well-established 'Bedroom DJ'(!), and before I knew it the 6MS boys asked me to do the warm-up slot at their Sunday all-dayers at the East Village club in Shoreditch.  Even now, to think that I have warmed up the decks for Jeff Young, DJ Red Greg, Sean P and others, is something that is almost unbelievable.  I loved every single one of those East Village gigs (which you can hear via the ‘Other Stuff’ section on the 6MS site) and listening back to them now shows me how much I have improved with my mixing and programming.

Not only am I the newest member of 6MS, I am the only female member too, so I’d like to think that I’m representing all the girls that love ‘our’ music.  My record collection is not quite as big as the other guys in 6MS, but it’s getting there, and I’m always happy when I suggest a tune that they don’t know!

You can catch me (along with Dave and JJ) every other Saturday morning at 11am GMT on the 6MS Sessions on Stomp Radio.

My Top Ten (which will keep changing, with the exception of the first two)