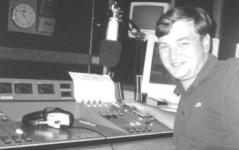 I'm a junior amongst us in terms of age, knowledge and record collection.

My love affair with Soul music started early one Sunday morning, circa 1980, while recording a pirate station. The ensuing tape provided me with a tune that was to change how I listened to music for the rest of my life. It was to have a profound effect on me as I realised that there was more to life musically than what I'd been listening to on Top of the Pops.

The particular track in question (it was half way through side two, incidentally) was The Blackbyrds - 'Rock Creek Park'. This changed my entire life. I played the thing over and over and over again, and is something that I have since done many times, often to my wife's annoyance.

This was the time when huge portable stereos where beginning to make an impression in the streets, parks, and markets and as such, pirate radio was to be heard everywhere you went. A friend of mine's brother (thanks Chris) also played an influential part in my discovering the delights of Soulful, funky music (he was beginning to assemble a collection of stuff you only ever heard on pirate radio, as was the way then).

At this time, the only things that mattered to my peers were a) which team you supported, and b) who had the best record collection. I could never quite work out which of the two passions one was supposed to enjoy more, so I embraced both fully. My record collection began not long after my 13th birthday, when I took my present money with me onto a bus to Croydon, and bought my very first 12" singles.

For me, though, the pleasure is in owning far more than playing. If you're anything like me, you'll play it to death for two days, and then be onto something new that you just have to have. This continued for about five years, through listening to shows such as Tony Blackburn and Steve Walsh on Radio London, Greg Edwards on Capital, and whatever was still around in the way of pirates. Other interests came and went, as did other fashions. I, however, managed to stay stuck firm to the same musical era. Yes, I hated it when the Acid scene erupted, and I did briefly flirt with Simple Minds, U2, Hendrix, even Dire Straits, but the groove was always there.

One Saturday morning, around 1993, I chanced upon a local market where someone was selling all the 12"s I either originally couldn't afford at the time, or didn't know of (and for just Â£2 each). I was now in a position to commence my collecting again. Trevor Nelson was doing his Sunday lunchtime show on Kiss, Greg was back on a Friday night on Jazz FM, and Robbie Vincent was playing the odd good track on his prerecorded Sunday morning show. I was discovering new music all the time, and wanting every bit of it that I could get my hands on. James Anthony was soon doing a show on Choice FM, and my list of wants was forever growing longer.

A lot of these wants became available to me via the Mastercuts compilation series (I promised myself that if I won the Lottery, the first thing I'd do is go out and buy every one of the Mastercuts series on vinyl and CD, and lock myself away to play them all. Sod the world cruise, the Mrs. can go on that !)

And so collecting took on more and more importance again. One Friday, while driving home from work, I found myself listening to a local station called Thames Radio, that was playing a favourite of mine I hadn't heard for ages. The track in question was Stone - 'Time'. I couldn't believe what I was hearing. Jazz, Funk, Soul - all of my favourites on a small local radio station. The DJ in question said that he'd be happy to hear from listeners via email. I promptly emailed him, and on his reply was a link to Alan Champ's website.

I soon made contact with Alan, who (as it turned out) lived just over the road from my office, and soon we were out for the odd beer to discuss music and football. New Year's Day 2001 saw myself and Alan invited to the Thames Radio studio as guests on an all day 'chill out' music show that our favourite DJ was hosting. I'd just like to say thank you Barrie for letting us join you that day, and for the MANY happy hours we subsequently spent in your company. Those were special nights both for me, and for my family.

Through Alan I was also introduced to John Johnson and Dave Cooper. John would record me tapes of stuff I'd never heard before, which blew me away. Dave would do me the odd CD of stuff that I still enjoy today. Both of these people have, through their extensive knowledge of music, brought me more musical pleasure than anyone has before or after. I thank you gents.

July 2002 saw my brother in law hold his 40th birthday party, so I volunteered to do the music for him. Whilst dropping off some vinyl and CDs the night before, he mentioned that he had a "proper DJ coming, into all that soul shit you like ... a northerner".

Upon further questioning, it transpired that the DJ's name was Ian, and his daughter was best mates with my niece. Upon even more investigation, it became clear that the Ian is question was actually one Ian Dewhirst, the man who had put together the Mastercuts series, and who was now living just round the corner !

So that's how I came to meet the four fellow members of our collective.

Personally, I'd like to thank the following for giving me access to their own collections (in person or via the airwaves) and for the joy that has brought me.